The Vale of Lyvennet has many charming villages and none more delightful than Morland.  Happily, remote from railway and motorway, privileged in its setting and enjoying the enviable tranquillity of an undisturbed countryside.  The scenery everywhere is lovely, green fields being sheltered by woodlands and watered by pleasant streams, and the village street , through which flows Morland Beck, remains picturesque and unspoiled.

Morland is seven miles south east of Penrith, Cumbria, in the centre of the Penrith, Appleby and Shap triangle, less than 15 minutes from Junctions 39 & 40 off the M6. Morland is situated in the Eden Valley and is centrally located in Cumbria ideal for the Lake District. the Pennines, Kendal and Keswick. 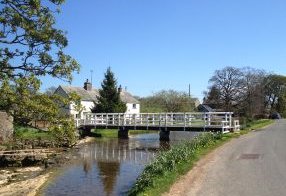 Morland — The wood on the moor — is a very ancient community that has adapted to meet the needs of its community over the ages. Unusually it has two main centres, The Square and the Hill Top.

The village square hosts the Crown Inn, the Old School, the Old Assembly Room, the Old Mill, powered by the now diverted Mill Race.  The principle farm, Hall Farm, is now converted into homes, and the original Parsonage, now Morland House.  Cottages built of local quarried limestone line the banks of Morland Beck which ﬂows into the Lyvennet and thence into the Eden.

The other, older centre is at the top of the hill where three ways meet.  Here stands the oldest structure in Cumbria still in daily use, St Lawrence’s Church. It has a remarkable Saxon tower built in about 1050 with walls ﬁve feet thick, the only one in the north west of England.

The mediaeval village had some industry with the textile mills using the water of Morland Beck, and it was important enough for King Edward I to spend the night here in 1292 on his way to ﬁght the Scots.

Since the war the village has transformed. in the 1950's new houses were built in the High Street. In the 1970's and 80's. Jackson Croft and Mother Croft were built, in the year 2000, Crown Inn Fields, and in 2007 Hall Farm was redeveloped for housing.